POTENTIAL MEAT AND THE POWER OF GOVERNMENT TEMER ... 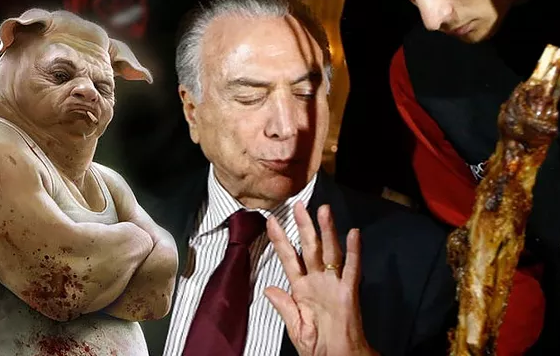 Posted by: Juremir machado da silva (mail from the people)

The classical leftist only trusts the state. The convicted liberal only takes faith in private initiative. For the first all defects are stemming from the thirst for profit, which he calls greed. For the latter it is enough to privatize everything that improves. Brazil has been a master at proving that state and private companies can err in the same way and, in general, associates. The radical liberal guarantees that if the state is taken out of play corruption ends. Who destroyed Mariana, the River Doce, and a whole region? Samarco, a private company belonging to Vale do Rio do Doce and a multinational. The state failed to supervise. Without him would Samarco have done everything right? Only those who believe in Harry Potter think so. Who sold rotten or turbinated meat to consumers? JBS (Friboi and Seara) and BRF (Perdigão and Sadia), two private agribusiness giants. What did they do? They corrupted civil servants. If they did not exist, would JBS and BRF ever deceive people? Win a pack of rotten meat who still stand for that idea. The presidio of Manaus was touched by an outsourcer.
When a politician bogs down in corruption his party rushes to say that he has nothing with the roll. It's always some thing. The opposition does not forgive: it puts the blame on the whole party. There are liberals who usually point the finger at the rot of the left. They do well to the extent that rot is not lacking in Brazilian leftism. They do not care if only a part of the left gets dirty. Now, with two agribusiness stars plunged into the guts in selling rotten meat to unsuspecting consumers, some are quick to say that it should not be generalized. Have the officials involved, however, acted against themselves or against their business interests? Can there be anything more abject than selling rotten food? Part of the left gives the change: who is more dangerous, the MST with its invasions or JBS and BRF with their poisoned meats?

Rotten theses pollute the air. There are those who accuse Lava Jato of producing unemployment by breaking up contractors with their investigations. What should I do? Let the corruption roll so as not to disrupt the economy? The same is happening with the Weak Meat operation. Social networks do not lack conspiracy theories asking who is going to break part of Brazilian agribusiness and affect our exports. What would be right to do? Let the sale of rotten meat continue so as not to harm our trade balance? The left is embarrassed to learn that JBS was fed with BNDES money in the Lula / Dilma era. The right is perplexed. Only 20% of Brazilian beef is exported. The rest is for external consumption. Rotten meat ends up on our plates. How many steaks will we have eaten like this? It is reported that the PMDB was charged with the release of putrid meat.
How do you feel Tony Ramos, Fátima Bernardes and Roberto Carlos who lent their reputations and pockets praising the qualities of JBS meat? What a sad country Brazil: its three most recent tragedies were provoked by private companies: contractors, Samarco, JBS and BRF. Are they going to say that they were forced to sell rotten meat because it is the rule of the game?
And Temer, the actor, the weasel, is going to apologize to the nation for taking the ambassadors to dinner at a steakhouse that only serves imported meat? It is the face of government: one applied after another.
Postado por Paulo Roberto Baum de Medeiros às 09:39